When I started teaching middle school, I knew that using binders would really frustrate me.  I had used interactive notebooks effectively as a grad student in math, and somewhat effectively as a teacher for writing.  I knew I wanted to use notebooks in Spanish, but I had no idea how.  Luckily, the internet exists.

I found so much information that I was completely overwhelmed.  Eventually, I put some ideas together and started to use the notebooks.

And I learned a few lessons VERY quickly, and some that took a lot longer to sink in.  So, for the edification of the language teacher who wants to use ISNs, here's what I've learned:

Interactive-ish:
Most interactive notebooks suggest that one side is the "input" side and the other side of the two-page spread is the "student" side, where they use mind maps, comics, and a variety of self-selected modes to respond to the input.  Doesn't that sound great?

The reality for me and my middle school kids is that I didn't want to spend class time modeling all the great ways to respond.  It would've taken months away from language learning, and I just don't have that much time with them to begin with.  The idea of choosing how to interact with the information was mind-blowing to the students, and while I still strongly believe in the value of doing so, it just didn't seem like the best use of time.  Thus, interactive-ish.

Instead, students keep all their information, notes, readings, practices, even assessments, in one place.  Occasionally, I collect documents to add to portfolios for P/T conferences, but most everything stays in one place for easy locating later.  Many parents and students love the simplicity of the system, and disorganized kids get some help in being more organized.

The real payoff this year is when I saw a few students using last year's notebook for reference during class! 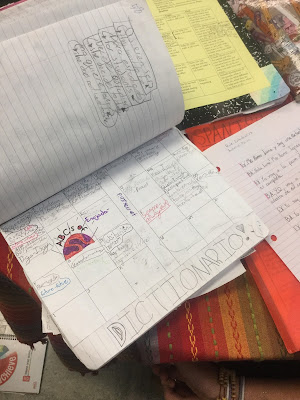 Posted by Elicia at 11:45 AM
Email ThisBlogThis!Share to TwitterShare to FacebookShare to Pinterest
Labels: Interactive-Notebooks