5 ways to use stuffed animals in class

Here are some of the ways I use stuffed animals in class:
1) story props- especially if I need to limit suggestions for stories. My particular favorite animals are, of course, cognates. Pengüino, dragón, cangarú, jirafa, koala, llama, tigre, delfín, and so on, but since the visual of a stuffed animal is so strong they tend to learn the names quickly. I am always amazed at how quickly they learn words like bat and spider, because they want to!
2) Special day rewards- once a week, my level 2s listen to an audio book, and they get to sit with their favorite stuffed animal. It's so simple but it makes the day feel special. And these are 8th graders. When I do my version of Kindergarten day, everyone gets a stuffed animal friend. 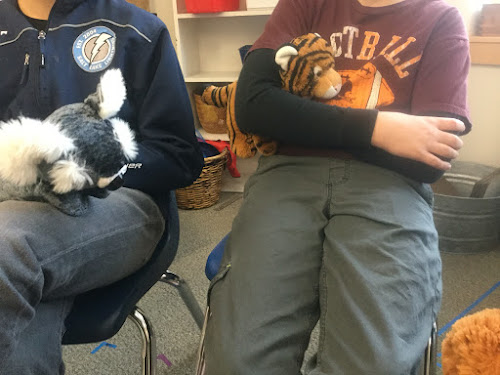 3) Story retells- it's much more fun to talk to your favorite animal than it is to talk to the wall or to your hand. It just is. It makes retells feel special too.
4) A couple of stuffed dogs are great if you are teaching Brandon Brown Quiere Un Perro, for comparisons, for actors to use, etc.
5) Modeling and practicing indirect object pronouns- in The Comprehensible Classroom's ¡Siéntate! unit, students are introduced to the structure le grita. However, I want them to hear that structure in a variety of forms, and to try to use it in a variety of ways. One of the many ways we practice the difference between le grita and les grita, le gritan and les gritan, is by making stuffed animal tableaus. Because the animals are mostly cognates, groups of kids work to show different forms of the structure with their animals, then give me great sentences about them. In order to reduce confusion when talking about "I" and "you", I simply put name tags "yo" and "tú" on the animals and we use those forms as well. 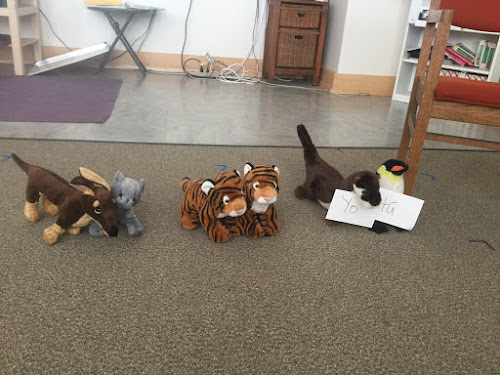