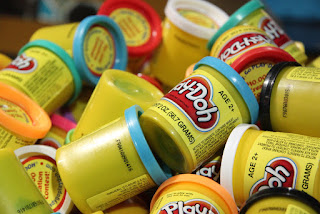 
First, get some play-doh. I recommend dollar store play doh, because that is my budget.  I got 16 little pots of the stuff for a couple of bucks. I know it won't last, but it will work for a while.

Second, get a comprehensible text.  I used stories that I story-asked the previous day.  Click here to see what one looks like.  These are stories using the script in SOMOS 1, Unit 9, but since it is the end of the year, they are written in past tense.

Next, pass out the play doh.

Come up with some expectations- I let the kids help me decide these in L1.

They suggested no grinding the play doh into the carpet or anything else, and to make that positive we decided "keep it on the board."  I added no mixing colors.  Again, framing it in the positive turned it into "one color only."  We also decided to use the reverse side of my whiteboards so the white part would
stay white. 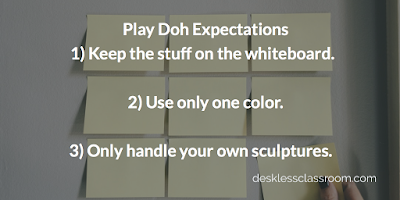 Their task: create 2-3 elements from the story while listening to me re-tell it.

My task: retell the story twice, going quite slowly, and making sure all the students understand all the words. 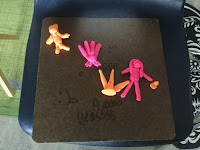 Once they had their "elements", we did a quick walk-around to see each other's art.

Finally, I had them group up with 2-3 people and combine their elements (but not colors). They had two minutes to try to visually tell as much of the story as possible.

I took pictures (because we ran out of time). 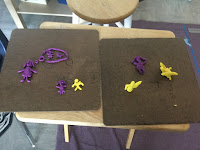 On Tuesday, we are going to do some kind of secret input activity with the pictures- maybe I am going to project them and point to an element, and they will have to find the best phrase to describe that element from their copy of the text.  Or maybe I am going to print the photos and have them walk around and find the phrases.  I *might* even have them use the picture of their little sculpture-montage (3-d mural?) to do a blind retell in a group.   I honestly don't know.

UPDATED: What we actually did on Tuesday, post Play-doh
I quickly imported the photos into a google slides presentation while the kids read the paper copy of the story with a partner.

Then I projected the photos, one at a time, and circled one element in each photo.
Kids had to go back to the text and find the best text to represent that element and copy it onto a whiteboard.
BUT...I also made it a competition.  The kid who made the element that I circled wrote what they were representing and put a star on their board. The kids who guessed what the artist intended got a point.
I almost never do this kind of competition, but it worked out really well because then the artist became the expert which made them feel special, and others got to correctly guess, and they read all or parts the story at least a dozen times trying to find the exact phrase to write down (so they could win). 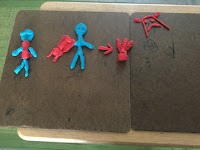 I do know that it was an awesome way to review a story and class flew by.  They all said it was one of the most fun things we did all year.  From my perspective, 100% of the students were engaged and they all got a ton of input.  So that's a win on a Friday in May. 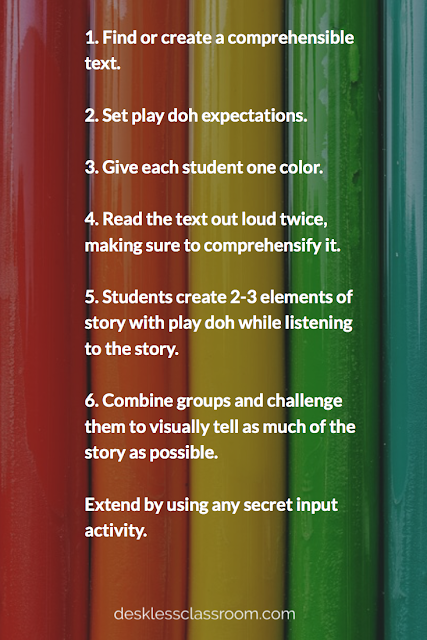 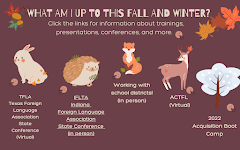