When I started at my current job, I was surprised that little attempt had been made by previous teachers (or teachers of younger grades) to teach or use the formal, or Usted form. If you don't speak Spanish, all it means is that to refer to someone in the second person, the "you" form, you use either a informal tense or third person if it's formal. Ok, so it's a little confusing and we have no equivalent in English. The kids got the idea but couldn't apply it, and the lessons I found were, well, legacy teaching and had no sticking power at all.

Enter the great TPRS listserv and the Best Idea Ever for using Usted in context, every day, and making it a natural part of language. I wish I knew who to thank, but whoever you are, I am grateful.

The idea is that every day, you choose one or two kids to be the king/ queen (dictator, Jedi knight, principal, etc.) and as your are going through the normal day's activities of asking questions and eliciting opinions, you constantly refer to that kid in the Usted form. I make a big deal out of self-correcting (ok, sometimes I just forget who it is, then remember after the words have left my mouth) and rephrasing the question in third person.

When I started this, I would always stop and do a grammar pop-up: "why am I using this verb instead of that? What am I asking the king?" And so on. Very quickly it became ingrained in the students that there is formal language and that they already know how to use it. How do I chose the kid? I read about having a thrift store tie or plastic crown, which are awesome ideas, but I just put a silly plastic toy randomly on a chair each day. That's it. Sometimes, if kids get it two days in a row, they give it to someone else, or if I know that it's someone's birthday, I hand it to them at the door.

Also, the king or queen does have some special privileges if the time is right. For instance, I often let them choose music to listen to, or whether or not we have a dance break, a game break, or a water and bathroom break. 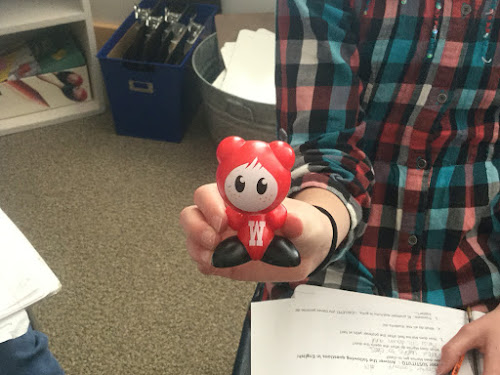 The one thing that I want to improve over the rest of the year is getting the kids to refer to the king or queen in the force form, but I think that will come with time and lots and lots of modeling.

How do you teach formal language? Any tips or tricks left in the comments would be appreciated!

Posted by Elicia at 12:07 PM
Email ThisBlogThis!Share to TwitterShare to FacebookShare to Pinterest
Labels: formal language, other