On sharing a classroom:
I share my deskless classroom with a desk-full classroom teacher.

I never in a million years thought it would be as easy as it is, but it is fine.  She has tables that stack like a very complicated jigsaw puzzle in one corner.  She has one wall of whiteboards and when the tables are set up, she orients toward that wall.  There are windowsills for storing her stuff, and a couple of small tables- like coffee tables for her overhead projector and computer.  Each that she teaches, the kids come in, un-stack the tables, and set them up.  She stops about three minutes early and they re-stack, then set up the chairs for my class.  It is pretty seamless.
My only minor complaint is that if I have left something in my bike bags, I can't easily get to them because the tables are pushed right up against my bike!  But really, that's just a matter of me being more organized and taking stuff out of my bag before her class starts!
It also means I see another adult regularly and, as this teacher is also the middle school director (and therefore my direct supervisor) I have the opportunity to observe her and learn from her.  It's really pretty great.  Last year, when I was hyperventilating about having to move my classroom and having to share, I never would have thought it would be this easy.

On why I went deskless:
I recently had a conversation (ok, a messaging conversation via a social media website) about going deskless and why I did it.  Here are some highlights:
How did you get to the point that you knew you needed to make this transition?
I was constantly feeling stifled by the lack of space- I wanted kids to move and act out stories (my first year with TPRS) and I wanted to move around to the kids, but I was super constrained.  Plus, I was constantly tripping.  Especially with backpacks!
When I had the opportunity to keep my desks in the hall for a week due to testing, I tried it and felt like I could do so much more to make my class feel different- more language acquisition than language memorization and grammar.
I think my class sends a powerful message to kids: memorizing and spouting facts, grade grabbing and ignoring the teacher don't work out here.  Being present, laughing, being yourself, and listening to understand are the values.  If that means we sit with stuffed animals sometimes, or a group of " toros" runs after the people to demonstrate runs from and runs to, then so much the better!    I also hate taking time to do things like seating charts and cleaning desks and stacking chairs...I think that I should be spending my time planning awesome lessons or recovering from my challenging job!

Can you describe what some of the challenges are with being deskless? Parent/admin by in? Challenges with students?
Admins were behind it, parents either like it or have no opinion.  Again, it helps set a different tone.
Challenges: some kids hate having to lean down and get their stuff.  (They can only bring in pencil case, notebooks, and whatever they need for the next class.) so they whine.
But, as soon as I let them spread out and work where ever they want, they stop whining.  I also have a couple of TV trays I got at a thrift store, and one table that the kids can use if they are doing independent work.  They manage it themselves - for the most part.  Really, I can't think of any real challenge with it.
And- no desks: fewer germs, so I have been sick a lot less since I went deskless!

Do you start the year deskless or transition?
I start the year deskless. I hand out these laminated character cards  and tell them to find the seat that matches their card.  From then on, that's how it works.
I also teach them to line up outside my door so I can greet them each day, give them their card, and hear the password.  Then, they come in, find their seat, and get to work on a starter.

In short, I can not imagine teaching with desks.  Ever again! 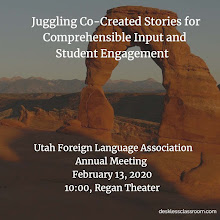