Some thoughts on lessons about empathy, diverse perspectives, and critical thinking:

Otros zapatos, otros ojos (other shoes, other eyes)
My level 2 Spanish students are grappling with the idea of immigration, documented and otherwise, and looking at push/pull factors for people who decide to immigrate.  This is the lead-up to reading the novel Esperanza, by Carol Gaab, which is the story of a woman in Guatemala whose husband is forced to flee for his life due to politics.  To help give the students a global perspective on immigration, we have been using the cultural unit El Viajero (by Martina Bex) which deals specifically with dangers on the Mexican/US border.  We also read a short reading (also by Ms. Bex) on immigration in Spain.  We have been having some rich discussions with a variety of viewpoints.

Today, I wanted to push the discussion a bit further.  I gave the students the warm-up questions (in the target language- TL):
Are you happy with your life here in the US?  Why?
Do you think that life is better in other countries? Why or why not? 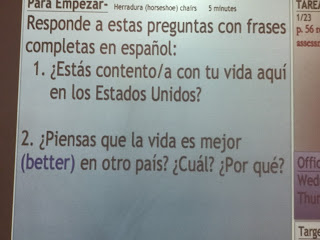 We discussed their answers for a while, then I asked them to imagine: (also in TL)
-You are black.
-You are an immigrant with dark skin.
-You are Muslim.

OK, I picked these three because they are topical and relevant.  Before writing them, in ENGLISH, I let them know that I had selected three roles that I felt were important to talk about.  These were just three of any possible other people.  I did this in English because I wanted them to know that I was being thoughtful about stereotypes, as I expected them to be thoughtful.  Also, I never miss an opportunity to point out that in Spanish, a description of someone (black, dark skinned, bi-racial, Catholic) is not considered racist or rude.  I pick my English very carefully, and this was a moment that I really wanted them to be clear on.

So, students spent a moment thinking about the answer to the same questions, but from someone else's eyes.  They shared their answers, then I asked them to introduce themselves (to say what perspective they were speaking from).

I was too engrossed in the fascinating, nuanced conversation that we had to report it back. Suffice it to say that it was a powerful thing to consider these same questions from a different person's perspective.  Their answers showed a great deal of empathy, knowledge of current issues (way to go, civics and history teacher!), and remarkably nuanced points of view.  They were not reductive (as in only thinking about people based on their skin color or religion) and they were able to find positives and negatives.  I was blown away.

Two of our essential attributes are empathy and being open-minded.  I feel like this lesson helped me see what an amazing job our school does with students.

Posted by Elicia at 1:57 PM
Email ThisBlogThis!Share to TwitterShare to FacebookShare to Pinterest
Labels: diversity, diversity and inclusion, musings