More Structure: Creating a Plan A Minus*

*Not quite Plan B, not quite low-fun input plan, but something else: when it's becoming clear that having conversations with students about something is something they are not yet ready for. Adding more structure.

They were CHATTY. Like I couldn't say a sentence without being interrupted by something totally unrelated or by students having side conversations about whatever they felt like.  It was not fun.  There were some other behaviors as well, but it was the CHATTY that was making me insane.

They also were very used to an output-heavy class and were very reluctant to engage with input.

I had to make 2 interventions/shifts in my teaching in order to meet the kids where they were.

I was a little caught up in my pre-pandemic teaching brain- pretty much constantly wondering why they weren't like the other classes, or why were they so completely unlike the class that I last had...the middle school kids that I adored and had so much fun with! It is so easy to dwell on wanting to teach the kids I wanted...not the kids that were actually in front of me.

But I had to teach the kids in front of me, not some idealized version of the kids I wanted. Which meant I had to make some changes to the class structure because what I was doing was not effective. And that, my friends, was on me.

This was a mindset shift that I had to work through- teaching the kids that were there.  (Thanks to Laurie Clarcq for naming this shift.) Once I made that shift though- it became a lot easier to manage.

I realized within the first week that I needed to give them a LOT more structure. Some of this was the group of kids, some of it was because as a long term sub they were not interested in investing in me or my class, and some was just...well, I guess because.

My lesson plans were to teach the song La Gozadera, using plans from The Comprehensible Classroom (please read the disclosure about my relationship with The Comprehensible Classroom here.) I thought a song unit with lots of reading and culture would be just the right amount of content to finish during my time as a sub.  Plus,  I've never taught the song before and wanted to try it.

When I looked at the plan, I saw a big looming disaster.

Nope. That was NOT going to work!

These students did not seem to be able to handle any kind of class discussion, and the free-form nature of Card Talk or Clip Chat seemed like a recipe for frustration and disaster. I believe that there would be very little input happening and a lot of frustration.

I did some reflecting about what the challenges were in class, and what actually was going well (when it was!), and I decided that I needed to give students more structure. I also decided that it would be a good thing to trick them into thinking that they were creating with language (output) while getting them to attend to the input. I framed this in my own head as "the illusion of output".

All of these ideas came from a mix mash of Jon Cowart's Weekly Packet, the Plan B plan from Martina Bex, Implementing Plan B (from me!) and Low Fun Input Plans from AnneMarie Chase, and my own experience as a teacher.

When I say little response sheet, that is exactly what I mean. Since I print everything "2-up" (or 50% sized) and then copy it on recycled paper from the copy room- copy paper that has already been copied on one side- it was quite small!

Telling them that we would discuss each picture then fill out the form was like magic. Suddenly they were listening, and mostly responding to my questions! Engagement!
After discussing someone's card, I filled in the blanks on the board and they copied them. (illusion of output, actually input!)

At the end of the form, I had two open ended sentences for them to finish themselves, and then we discussed how they finished the sentences (also more illusion of output, but with the focus on me leading the discussion- that is, input).

For the movietalk portion of the lesson plan, I created a slideshow with screenshots. Since the lesson plans ask the teacher to just use the intro to the video, I only used 3 stills for this part.

Question 1 was ¿Qué ves? (What do you see?)
I gave them some input first, then let them tell a partner what they saw, then I talked about their responses, and THEN I let them write. See how the input came first?

Question 2 was ¿Dónde están las personas? (Where are the people?). Again, I showed the slide, talked about it, let them make predictions, talked about their predictions and why they thought that, and then let them write. Since I noticed that they weren't very good explaining how they reached their conclusions (which is an important skill in any language!) I lead the discussion down that road: What's your evidence? Why do you say that? Why do you think that?

The third question was something like ¿Cómo están las personas" (How are the people feeling?) and again I got their ideas, led a conversation, asked them for some evidence for their thinking, then let them write.

I also added a space for them to copy the Write and Discuss, just in case I decided that they needed that. (They did not, and I am not a fan of having students copy them in general, but I thought I might need that space!)

For the actual watching of the video, I gave them a 5 Senses Video Viewing Form from Martina Bex and they had to fill it out while they were watching. After, I led a discussion. I really like this particular sheet because it allows them to write at the level that they wish- single words, phrases, and sentences. 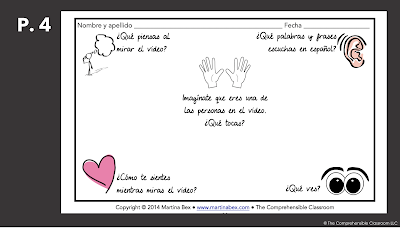 Now, it took me less than 10 minutes to make those response sheets- which may sound fast (and it was! Remember- I'm pretty experienced!). I hoped they would work - I thought they might be exactly the ticket- but I didn't want to spend a ton of time on creating. I was using the MVP principle in creating these: the Minimum Viable Product.  Basically, the idea is to create the thing that you think will work, and after you use it, then reflect, touch it up, change it, make it pretty if that's your thing. (I learned this from Angela Watson and it has been a HUGE timesaver mindset for me!)

What Happened in Class

To my everlasting joy, it went pretty well. I was able to give them the input because they felt like they were getting output. (Illusion of output, very structured output, lots of input!)

Once they bought in to the illusion of output, I was able to do the more free-form activities (Card Talk, Clip Chat) with much less difficulty. The response sheets gave exactly the right amount of structure to let the input still be about the students (their cards, their interests, their ideas).

The reading activities were pretty straightforward and although I was surprised that they had never done activities like the ones I was asking them to do, once they figured out what I was asking for (reading, re-reading, reading closely, interacting with the text in a way (that forced them to make meaning), they were pretty cooperative.

Note: I did a major behavior intervention as well- which I will post about at a later date, but I think the structure is what allowed them to settle in and let input happen.
Posted by Elicia at 2:13 PM
Email ThisBlogThis!Share to TwitterShare to FacebookShare to Pinterest
Labels: classroom engagement and cooperation, classroom management, lesson planning, Plan B