Last year, I decided to put a bunch of time into what I called The Great Organizational Project. My idea was that I needed a systematic way to organize and store my files (well, duh) that was going to help me prep and plan faster.  Since I decided to commit to a specific TPRS curriculum and since I teach it sequentially (that is, I teach it across four different classes, just at a different pace for each), it made sense to archive it in a very thoughtful and useful way.

First: by "unit" I am referring to "target structures and cultural connection pieces."  Don't be misled by the legacy title- I am not talking about the "food unit" or the "travel by airplane unit".

I had to figure out how to store the units not in use and also how to keep track of four separate courses' worth of paperwork. (Made tinier by my habit of copying everything half size on recycled paper, then cutting it down to the precisely best size to fall out of a file folder.)  More on that in another post.

Plus, I realized that I had no good way of capturing all my notes, realizations, reflections, ideas, and extra resources, and that was going to be valuable as I wanted to teach at the same school/same level for more than a year or two.

This last bit was really important because nowhere could I find discussion about how to organize all the stuff that is important for reflection- and for me, that includes all the notes, extra resources, youtube videos, edpuzzles, etc.  Also, as we are told, reflective teachers make better teachers.  And I did *SO MUCH* self reflection in grad school (and found it to be really helpful) that the habit is pretty ingrained in me.

Evernote and Dropbox. (Scroll down for how I actually use them)

The long version, with details: (what I tried, why it failed, how I figured out what does work)


Organizing resources and reflections:
Here are some of the systems that I have tried (unsuccessfully) to capture all that stuff:

Evernote: Why I love it and how I use it

Finally,  I committed to Evernote for this part.  I love Evernote because...

How I use Evernote

Organizing files (docs and pdfs)
Dropbox continues to be my go-to (go to the bank and throw money at them, but still go-to) system for storing most things on the computer.
If you don't know about it, explore it.  The advantage of it for me is that I can use Dropbox to save every single important document, while using the interface of my beloved MacbookPro, complete with the fantastic tag and organizational layout that is part of the apple UI.  And if something catastrophic happened to my computer (say, while riding to and from school with it on my bike) I would have a timely backup that I could access instantly and teach from immediately.
I decided to make every dropbox master file look the same so that it would be as easy to find stuff digitally as it is to find stuff in my binders.  For me, it looks like folders in each master folder called: Activities, assessments, to project, stories.  Again, for me, making electronic files easy to find is a huge priority.  Searching through word documents by vague title (Spanish, say, or reading activities) is a real drag and never results in finding what you are looking for.

Youtube, google drive, and other outliers
It turns out that if I had started using Evernote when I first started teaching, organizing youtube and google drive would be no biggie.  And as I write this, I realize that I could use Evernote to organize these two very important technology resources, just the same way I use it to organize edpuzzles (cool but labor intensive), kahoots (same), old-school jeopardy-on-the-internet games (extra cool), pinterest pages, vimeo links, soundcloud links, etc.  I will probably see if just copying the relevant google or youtube url into evernote and tagging it well will save time.  Because, you see, that although I have playlists by unit in youtube, they do not alphabetize and that drives me up the wall, and my googledrive is something of a disorganized mess, because really, who has the time to organize that too?

On labeling and titles
As silly as it seems, deciding on titles and investing in good paper labels (for actual print things) really makes a difference in organizing.  The same way that I use consistent tags in Evernote, being consistent about what you call something makes it easier find.  For instance, in quizlet (a somewhat crummy platform, in my opinion, as far as organization but a useful tool to keep parents happy and make kids feel like they are doing something familiar, which can be good for families new to TPRS who want vocabulary instruction [note: my Quizlets are resources for the students, and only once ever in three years have they been used to teach vocabulary, said the TPRS teacher defensively]) having all the unit names be familiar makes it slightly easier to organize resources.  For curriculum collaboration in google drive across states, possibly countries, and certainly grades, it is imperative to use the same names. (And since I do participate in this kind of collaboration, I really value it.)

So, that is how I organize digital resources. 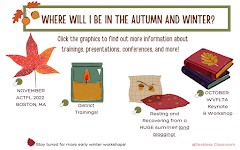